Similar to the last problem from the appendix in that we’re taking an actual game and extending it.

The problem: NxN Go.  This is problem GP10 in the appendix.

Example: Instead of a true example, what I think is most relevant here is a little discussion of the rules and basic strategy of Go.  In Go, players take turns playing stones on a grid, with the goal of surrounding spaces on the board with pieces of your color:

(all pictures are taken from the tutorial at https://www.pandanet.co.jp/English/learning_go/learning_go_2.html):

In this case, white has surrounded 9 spaces (stones are placed at intersections, including the edges of the board).

If a stone of the other color can be surrounded on all 4 sides by a stone of your color, the stone is captured, scoring you a point at the end of the game:

In this case, the black play at “1” captures the white piece (and likely gains black an additional point for having surrounded territory at the end of the game)

Here, the white play at “1” creates two eyes.  There is no way for black to surround all of the white pieces since they would have to play in both empty holes, and as soon as black plays in one of the holes, the black piece is surrounded and immediately captured.

So, the main goal of Go (and the proof) revolves around creating “safe” structures that contain two eyes and using them to capture as much territory as possible.

Reduction: The paper by Lichtenstein and Sipser reduce from Planar Geography.  The idea is to have a set of safe territory for White, and another threatened set of stones large enough that if it can be made safe, White will win, but if it can be captured, Black will win.  Here’s the picture from the paper: 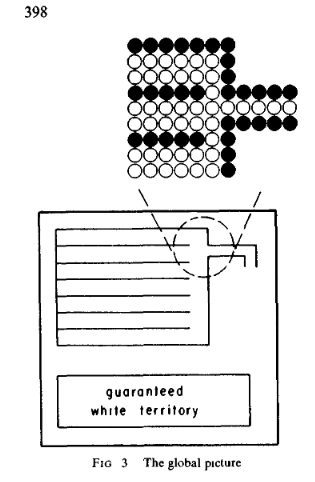 Black pieces surround white all the way around, so the only escape would be for white to extend the “pipe” on the left around to the safe white spaces (or some other group of two eyes, which will keep the large group alive).  Then we encode the vertices and edges in the graph as sets of stones, where each “choice” of going through an edge is reflected by a choice of where stones are placed.

There are many types of subgraphs and corresponding board positions in the paper, here’s just one of them: 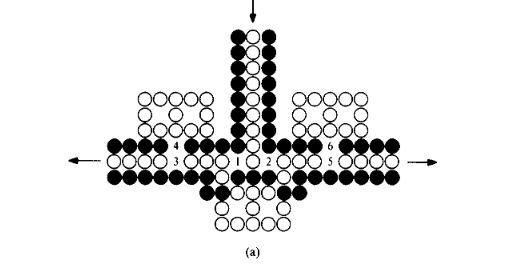 Here’s the general structure of the arguments that show how the play “has” to go through this vertex.  Suppose we are coming from the top, and white wants to go left.

As a result, the “edge” going through this vertex and coming out to the left has been chosen.

Difficulty: 7. I think this is easier to see than the NxN checkers reduction, but still takes a lot of cases and structures to realize.

This entry was posted in Appendix- Games and Puzzles and tagged Difficulty 7, GP10, NxN Go, Planar Geography. Bookmark the permalink.