Today I’m posting 2 problems relating to my student Dan Thornton’s independent study work.  I’m out of town this week and next, so I have these posts set to automatically go up on Tuesday afternoon.

Dan’s independent study was based on the “Automaton Identification” problem, but to show that reduction, he needs to use a variant of 3SAT, which he shows here:

The problem: Monotone EQ SAT. This is a specific instance of Monotone SAT.

The description:
We are given a conjunction of clauses

where each clause in

contains all negated or non-negated variables

and the number of clauses and variables are equal, is there an assignment of the variables so that

is satisfied? Our instance will have

Example:
Here is an

may be satisfied by the following assignment:

The reduction:
We will reduce from Monotone SAT. So we are given an instance of Monotone  SAT with the clauses

here each clause is of the form

where each clause has all negated or non-negated variables. This is different from Monotone EQ SAT as we do not require the number of variables and clauses to be equal.
From this

, into one of Monotone EQ SAT by the following iterative procedure. New variables will be denoted by

and new clauses by

The above algorithm will produce an equation

that is in Monotone EQ  SAT. This may be shown by induction. Notice that before the procedure if

that we will add 2 new variables and 3 new clauses.

then we will add 2 new variables but only a single new clause. Either way the difference between the number of variables and clauses,

steps we will obtain an formula where

= 0. Such a formula is an instance of Monotone EQ SAT.

that maps every variable to a truth value, such that

is satisfied. Then after we preform the above algorithm we have an instance of

, now our instance of

will be of the form

and we may trivially satisfy

by simply assigning all new variables

to true.
This will give us a new truth assignment function

Difficulty: 3.  The logical manipulations aren’t hard, but it is possible to mess them up.  For example, it’s important that the algorithm above reduces the difference in variables and clauses by 1 each iteration.  If it can reduce by more, you run the risk of skipping over the EQ state.

Here’s the actual problem my student Dan Thornton spent most of his semester trying to understand and prove.  It’s pretty crazy.

The problem: Automaton Identification from Given Data.  We abbreviate it “AutID”.  G&J call this problem “Minimum Inferred Finite State Automaton” and it is problem AL8 in the appendix.

The description: Given a finite set of data, is it possible to build a deterministic finite automata of

or fewer states that agrees with the data?
Prior to giving a description of this problem we must introduce a few concepts and definitions. We want to construct a finite automation, this means a Mealy model deterministic finite automata. Formally a 6-tuple of the form

We use the standard convention that

refers to the empty string of no characters.

we only get to see the last output character

Here the edges are labeled 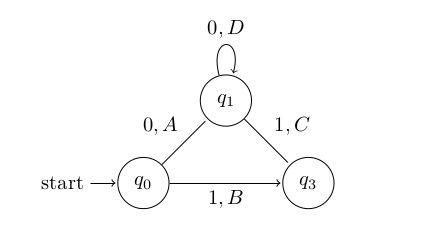 So if the above known black box was passed the string

where as the black box would only give us back

Now our above finite automata is constructed using data we are given, here we assume that data is a set

of finite pairs of the form

is not empty and

if for every datum

, the final output character of

and data, a set

of finite pairs determine if an automation of

or fewer states exists that agrees with D.

The reduction by Gold uses Monotone EQ SAT. So we are given a conjunction of clauses

where each clause in

contains all negated or non-negated variables

and the number of clauses and variables is equal, is there an assignment of the variables so that

is satisfied? Our instance will have

clauses and variables. Clauses will be numbered

and variables will be numbered

. Indices in our reduction will sometimes force us to reference

. We may think of this variable as simply a place holder for

in such a way that if we can create a finite automata from our encoding, then we can use it to obtain a solution to the instance of Monotone EQ SAT if one exists.

, to do so we need the following functions:

is really a placeholder for

.
Given a propositional formula

which is an instance of MonotoneEQ SAT we encode it by the following:

As a simple example we convert to data the following formula

So after our conversion we get:

Aut ID instance
Now we create an instance of

be the number of variables

that agrees with the data in

. Now we may use the transition function

and the output function

to deduce properties of

, this is the state that

is in after receiving the input string

A splitting string of

. If such a string exists then obviously

. If two states do not have splitting string then they are equivalent

We define variable states as follows, a variable

‘s variable state, we will sometimes refer to this as

Clause states are defined in a manner similar to variable states. A clause

corresponds to the identifying tag in the encoding of

‘s clause state, we will sometimes refer to this as

, this means that these two states are equivalent or alternatively that there does not exist a splitting string of

Theorem 1:All variable states are different.

. Then in the encoding of

respectively. But now we may define the splitting string

. The final element of

is defined in our data

. By a similar argument we get

, in our data this corresponds to one of the entries

must agree with the data, so as a result these states

cannot be equal. Thus we have reached a contradiction.

Theorem 2: Each state in our finite automata

corresponds to exactly one variable.

Proof. The above follows by the pigeonhole principle, as

By the above we may talk about the states of

in term of the variable each state corresponds to.

are equal, Then clause

is not contained in

. Once again we have the following encodings

that were defined in our construction of

. Now we may define a splitting string

. When we append the splitting string to each of the above encodings we get

. Both of these strings are defined in our data

respectively, and by our assumption that

is not contained in

So by the a conclusion identical to that of Theorem 1,

and our theorem follows.

Proof. Once again we proceed by contradiction, assume

are of opposite composition. Once again we get each clauses encoding

respectively. Now we may define the splitting string

. Looking at the final character output by

are of opposite composition. Thus we arrive at a contradiction.

gives us a solution to

Proof. By Theorem 2 every clause state must be assigned to a single variable state, notice this does not mean only a single assignment is possible but just the given automata

assigns clauses to the variables that could potentially satisfy them. Furthermore by Theorem 4, each variable state is given clauses of only one composition, so there is an obvious variable assignment to satisfy all of the clause states equal to a given variable state.

True{Aut  ID}
Now we assume there exists a mapping

that satisfies our instance of Monotone EQ SAT,

clauses and variables. From this mapping we build a finite automata

that agrees with all data

So first we define all 1-transitions as given in the following example automata, obviously such transitions will satisfy all data in

to satisfy all of the data in

Such mappings may be added to

by noticing the following, as soon as we encounter a 0 in input we must transition to a clause state. So we may define a 0-transition for every state in

that maps the clause state

(which recall corresponds to the string

) to the variable state

that satisfies it. When adding 0-transitions we must be careful as if clause

is satisfied by variable

then in order to agree with the data in

we really should map

due to the definition of

Now we must assign an output to each of these 0-transitions. To do so we iterate through every clause state

. At each clause state we assign the output of the 0-transition starting at this state to be

. Notice that if two clause states

are identical, then they must both be satisfied by the same variable and so therefore

Below is an example of adding such a 0-transition and assigning its output:

,which corresponds to the string

, to the variable state

. Semantically this means that the variable

satisfies this clause.
The Red edge shows us adding the output value of a 0-transition, as from the above blue edge we know

corresponds to the clause

Proof.  This is quite obvious from our example of

in Figure 1. We have defined all the

transitions, and notice that the final output of all

this exactly matches our data

Proof:Here we consider the final character output of

for all encodings of fixed clause

, these encodings are precisely the

. Now with the addition of the

-transitions, we transition into

, and from this state we only worry about

-transitions. Recall that in our definition of

, all datum are of the form

there is a single

-transition that outputs the non-zero value

From our assignment of

-transitions defined above this singular

will occur for the variable

will give the datum (

,1). Now notice the corresponding entry in

), but all of these datum were removed from

. So the sufficiency condition above is satisfied.

Proof: The manner in which we defined our 0 transitions explicitly involved a

term, so for any clause state

, now a 0 transition as defined above will output

which will obviously agree with

By Theorem 6, Theorem 7, and Theorem 8. We conclude that

will agree with data

Difficulty: 9.  This is basically the reduction in the Gold paper, though Dan reorganized it a bunch to make it fit our format, and be more understandable.  But the formatting of the various variables, the fact that you need to define the IF function on variable k to talk about zl-k instead of zk, and the three different kinds of test data all make this super hard to understand.  In some ways, I wonder if this should be a 10, given the work we did on it.  But I’m saving the 10’s for things that are truly impenetrable, and we did manage to figure this one out.