The problem: Code Generation for Parallel Assignments.  This is problem PO6 in the appendix.

The description: Given a set of variables V= {v1 ..vn}, a set of assignments A= {A1..An}, where each assignment sets some variable vi to the result of some operation on a subset of parameters of V, and an integer K.

Can we order the elements of V in such a way that an assignment references a variable that comes later in the ordering at most K times?

Example: Sethi’s paper, which describes this problem, defines a parallel assignment as a statement like this:

The idea is that both i and x get set to their values in the same assignment.

Computing x first and i second has a cost of 0, because we don’t need to keep the value of x around for the second instruction.  Our job is to minimize this cost (or, technically, to see if the cost is <= K).

What’s interesting to me, but not really discussed in the paper, is the fact that different realizations have different semantic meanings.  If we compute the i+1 first, x gets the updated value of i, but if we compute it second, then x gets the old value of i.  Maybe this kind of potential confusion is why we don’t typically see this kind of assignment operation in the present day.

Reduction: Sethi uses Feedback Node Set. So we start with a directed graph G.  We will map all of the vertices in the graph to variables.  For each vertex vi in the graph, if vi has edges connecting to w1..wk, we say that vi is computed from those vertices (the w1..wk are the parameters to create vi).  We will use the same K from the Feedback Node Set problem.

Suppose our graph has a set U of feedback vertices.  Sethi provides a separate proof about feedback vertex sets: A graph G has a feedback set U if and only if we can order the vertices in the graph y1..yn such that if we have a “backward” edge from yj to yi, if j > i, then yj is in U.

Difficulty: 6.  The sequence proof is a bit challenging to follow but other than that the hard part of this is understanding the problem.  One thing that tripped me up was that the cost of the realization was the number of variables that had backward references, not the number of references themselves.  (So, a variable that has 2 references to 2 different future instructions counts just once)

The reason I found the easier reduction for the previous problem is because it was in the paper that discussed this similar problem.

The problem: Code Generation With Unlimited Registers.  This is problem PO5 in the appendix

The description: Given a Directed, Acyclic graph G=(V, A), where no vertex has an out-degree larger than 2.    Just like the previous problem, the leaves of this graph (with in-degree 0) are our starting values, and the roots of the graph (with out-degree 0) are the final values we need to compute.

The operations that are allowed are:

(The problem definition in G&J makes a big deal about labeling the (at most) 2 edges leaving a vertex v as “Left” and “Right”, and so the ri comes from the “Left” side, and the rj comes from the “Right” side.  But G&J also say (as a “private communication”) that this problem remains NP-Complete if we allow commutative instructions- in other words, ri <- rj op ri is also allowed.  So I don’t think it matters.)

Can we compute the root vertices of G in K or fewer instructions, if we allow any number of values to be stored in registers? 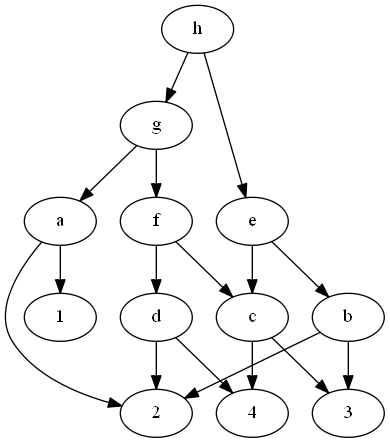 The reason why this is hard, even with as many registers as we want, is because the operations are “accumulator” operations- they always put the result of the operation back into one of the operand registers, killing the old value.  So if we want to use that value more than once, we either need to reload it or be very careful about the order in which we compute vertices.

If we allowed 3-register operations like rk = ri op rj, then this is easily solvable by computing values “up the graph” in basically any bottom-up order you want, putting each vertex’s value into a new register.

Reduction: This is in the paper by Aho, Johnson, and Ullman that we used last time also talks about this variant of the problem.  They say that it’s basically the same situation, you just need to load the lead values into registers right away, and you get a situation that is “similar to” the one-register machine.  I think that the basic structure of the chains we are building still holds in this new situation.

Difficulty The one-register problem is a 6 or a 7, this is probably a 5 or 6 once you have that.  If you are going to make the students walk through the whole reduction step by step in this new situation, it might be a bit harder. 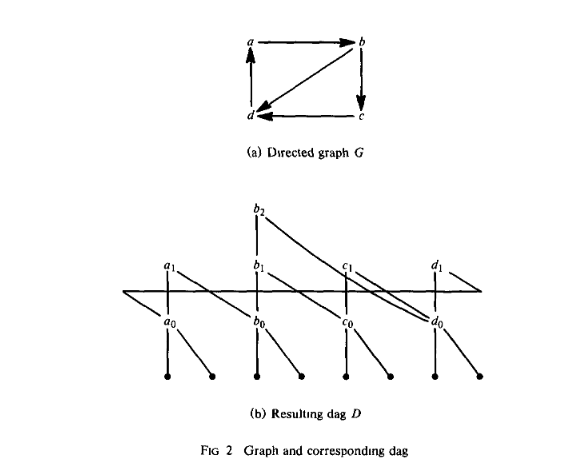 Posted on September 30, 2014 | Enter your password to view comments.