The next couple of problems talk about “Petri Nets”, which I hadn’t heard of before.  I found a decent explanation here, and the Wikipedia article also has a good explanation, though I found it pretty dense.  I also took some definitions from a nicely explained paper by Murata.

The problem: Non-liveness of Free Choice Petri Nets.  This is problem MS3 in the appendix.

Example: Here is a live Petri Net from Murata’s paper: 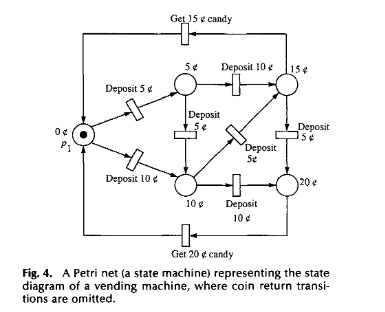 Notice how whatever sequence of transitions we do from the initial state, we will be able to “reset” the net and get to any transition.

Notice that this net is also not “Free choice”, because place P1 gets inputs from 2 transitions, and also feeds into 2 transitions (The 10¢ and 25¢ places also violate this property)

Here is a non-live one from the same paper: 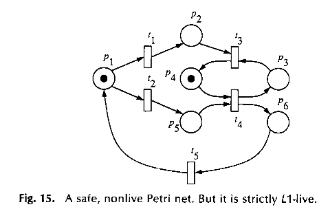 This is not live because even though every transition is reachable from the start state, if we choose the t1 transition to start, we will not be able to ever fire t4.  (In fact, we won’t be able to fire any other transitions).

Also notice that this second Net does have the Free choice property, since each circle has either indegree or outdegree 1 (or both).

Reduction: The reduction is in the paper by Jones, Landweber, and Lien, and it reduces from CNF-SAT. So we start with a formula that has n variables and k clauses.  The Petri Net we build has three places for each variable xi:

We will also have one last place “F”, which will mean the formula is not true (because some clause was not true)

We will have transitions between:

So, let’s suppose the formula is satisfiable.  The tokens start in each Ai, which has transitions to xi and ~xi.  Pick the transition that corresponds to how we set xi in the satisfying assignment of the formula. This will enable some transitions in clauses with xi in it to fire- the literals that have the opposite settings of the variable.  But since every clause is satisfiable, there will not be enough firings to enable the transition to F to fire, and the net will be dead (no more firings will happen after those).

On the other hand, if the formula is not satisfiable, then all assignments of variables make at least one clause false.  So no matter how we decide to make the Ai transition go (to the xi or to the ~xi), some clause will not be satisfied, and that clause will be able to fire its transition to F.  Firing F puts a token at each Ai, enabling all transitions to start again.

Difficulty: 6.  Obviously, this only works if you’ve discussed Petri Nets previously, since learning about them is a separate involved discussion.  But outside of that, the idea of a transition firing on a clause being false is a pretty cool one, and makes sense, because we are looking for non- liveliness, so a Satisfiable formula means we want dead transitions.

Also, I want to commend the Jones, Landweber, and Lien paper for having a very nice example explaining how a formula turns into a Petri Net complete with transitions and explanations working through how what fires and why.  I don’t get that in every paper, and it was nice of them to think about people like me coming along 45 years later.

This is the last of the “Program Optimization” problems, and the next section is the last one on “Miscellaneous” problems, which has 19 problems in it.  So, unless some diversion into a problem not in the book happens, we’re on the countdown through the last 20 problems!  The end is in sight!

The problem: Programs with Formally Recursive Procedures.  This is problem PO20 in the Appendix.

The description: Given a set of function definitions and a program that makes a sequence of function calls using those definitions (the paper by Winklmann uses Algol because he wrote it in 1982.  But any language that allows recursion should work).   Are any of the procedures in the program formally recursive?  For our purposes, “formally recursive” means that there exists a chain of calls that has a call to a function higher in the chain (not necessarily a parent, any ancestor will do).

My first instinct was to wonder if this problem was actually undecidable.  It’s not because we will have some fixed # of procedures d, and so any call chain needs to be checked only to depth d+1- if we get that far, we must have a repeat someplace.  If we never get that far, we can back up and check other call chains, eventually checking all of the paths through the call tree exhaustively.  The proof that the problem is in NP is in the paper, but it involves representing the call tree as a DAG so we can use one vertex for two equivalent paths.  Winklmann says that if you do that the number of vertices is “bounded” by the number of procedures in the program (he doesn’t say what that bound is, though).

Example: It’s hard to make a small example that’s not obvious.  How about this:

If “F” is replaced by a call to C, the program is formally recursive, because the call chain main->A->C->A has a repeat.  If we replace that F with another call to B the program is not formally recursive because even though recursive functions like E exist (and even though B gets called twice in two different chains), there is no call chain that will start at main and hit E (or anything) more than once.

Reduction: Winklmann uses 3SAT.  So we start with a formula B with m clauses and n variables.  We’ll write some functions:

Truej(cj+1..cm):There is one “true” function for each clause, each one has a parameter for all clauses with larger numbers. The paper writes this function a little weirdly, but I think a good definition is:

So, as long as the parameters are true, we’ll continue calling down through the  true functions to the end.  The last True function is what will make us formally recursive:

Truem(): Calls Assign1(False, False, ...False). Our main program will begin with a call to Assign1 with these exact parameters, so if we can get here, we will have found our recursive call.

The Check function’s job is to start the appropriate call to True or False:

Our main program is just a call to Assign1(False, False..False).  It’ll go through all of the various AssignXifuntions trying to assign variables (and thus clauses) to true. Each assignment will be checked, and each check will either hit a False function (meaning a clause wasn’t satisfied, and so we will backtrack and try an alternate assignment) or the final True function, which will generate our recursive call.  So this program has a recursive call chain if and only if the formula was satisfiable.

Notice that while the run of this program might take exponential time, that’s ok because reductions are concerned with the time it takes to create the new problem instance, and there are “just” 2m+n+1 functions to create.

Difficulty: 6.  This is a neat problem and reduction- I think the “write a backtracking program to try all combinations” is pretty gettable.  The hard part is the check and true/false functions at the end.  We can’t really use loops because loops make programs undecidable (you can’t show the problem is in NP by going down d+1 calls if you might have an infinite loop someplace and won’t get through all of those calls).  So we have to build a chain of recursive calls instead, with dead-ends to force the backtracking.

This paper (also referenced in our last problem) is the first one in the Bibliography whose first author started with “T”.  It feels weird that it took so long to get that letter.  Now the only letters missing in the Bibliography are “Q” (though I have a direct proof from Maurice Queyranne in the K-Closure post),  “X”, and “Z”.  I’m not sure I’ll get any “X” or “Z” papers, we’ll see.

The problem: Inequivalence of Simple Functions.  This is problem PO15 in the appendix.

The description: A simple function is a composition of basic functions on non-negative integers from:

We are given two simple functions f and g over some set of initial variables X.  Can we provide starting values in X that give different outputs for f and g?

Reduction: Tsichritzis uses Inequivalence of Loop Programs Without Nesting, which we did last time.  The idea is to show that all such program actually define simple functions (and so therefore if we can find the simple function derived from a program, that is our reduction).

First, he shows that a program without loops either returns xi + k, or k, where xi is some variable and k is a constant.  The idea is that since we can only do three things, each command can be rewritten from the top down:

So what is left is what goes on inside a loop.  Since loops cannot be nested, we know that the body of the loop only has the basic instructions.  Thus, all a loop can do is, for each variable Yi:

It’s possible for this set of linking to form a cycle.  It’s also possible for variables to depend on variables inside a cycle, but not to be in the cycle themselves.  The third possibility is for as variable to not care about a cycle at all and be independent.  The values of the independent variables are easy to express as simple functions.

If we have a cycle, the paper shows how the changes to the variable in one iteration can get added together by everything in the cycle, and then multiplied by the number of iterations the cycle goes.  These can also be represented as simple functions.

Difficulty: 6  The actual task we’re trying to do (“represent this program as a simple function”) is pretty easy to see.  The details of how to write the simple functions are pretty finicky, though.

Posted on November 4, 2021 | Enter your password to view comments.